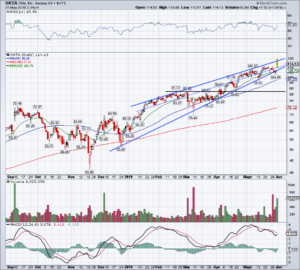 U.S. equities were hit on Friday thanks to a surprise tariff tweet from President Trump toward Mexico. It’s got investors spooked about an escalating trade war. Let’s look at some top stock trades going into next week.

What a beast. Just like Veeva (NASDAQ:VEEV) — which we covered yesterday — Okta (NASDAQ:OKTA) is outperforming in a tough day on Wall Street. Shares are up 7% after reporting earnings and, also like Veeva, are running into possible channel resistance.

The thing with these high-valuation, high-growth stocks is that when they are ready to move on, they can clear prior levels and trends in a hurry to establish new ones. Fighting a bearish overall tape makes this tough to do, but it can be done.

In this case, Okta would have needed to maintain today’s highs near $120 to breakout over channel resistance. If we get a rebound next week, see if Okta can persist higher above this level. On a pullback, see if $107 to $110 can buoy the name. The latter is channel support, while the former is the 20-day moving average. 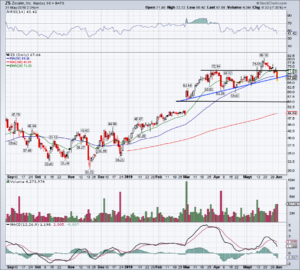 Zscaler (NASDAQ:ZS) has been a great trade throughout May, but now shares are breaking down. The stock fell below its breakout zone at $72.50 and Friday’s 6.5% drop is hurting too.

It’s clinging to uptrend support and has lost its 20-day and 50-day moving averages. I’m not feeling good about ZS, at least not in this market. If it can rebound and reclaim $72.50, I’ll change my mind. But below $67 could create issues. On the downside, see if it fetches a bid in the low $60s. If not, the gap-up level at $55 may be in the cards. 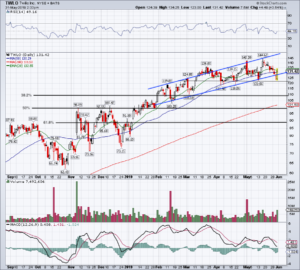 Click to EnlargeTwilio (NYSE:TWLO) has a secondary offering coming in the midst of this market mess and is still holding up. Shares ended higher by almost 4% on Friday.

I love seeing strength on a down stretch in the market. Love it. These are the names that do well when the market bottoms and buyers come back. But Twilio stock still has me concerned.

The 20-day moving average is starting to roll over, as is the 50-day. Should the former cross below the latter, it’ll signal that short-term momentum has waned, and will be exacerbated should TWLO find this conflux as resistance. Reclaiming $132.50 would negate this concern, while losing the two-day low (near $123) would confirm it.

It would force buyers to step in in the low-$120s and should the selling overwhelm them, the 38.2% retracement near $110 is the next line in the sand. I love TWLO, but keep in mind that it’s still a double from the October lows and up 450% since January 2018. 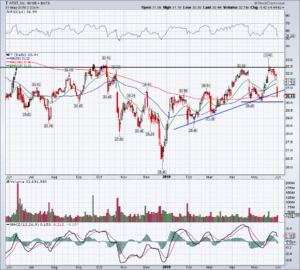 AT&T (NYSE:T) has been trading really well so far in 2019. Its series of higher lows have allowed AT&T to push new 52-week highs this year. But after a slight pullback over the past few sessions, the floor gave on Friday.

The stock tumbled over 4%, with reports suggesting Amazon (NASDAQ:AMZN) — which doesn’t look so hot itself and may well test the 200-day like we’ve been waiting for — might be interested in Boost Mobile.

It seems silly for T to fall on this, but no one wants to go against Amazon…in anything.

The sooner it reclaims the 50-day, the better. If not, more choppiness is to be expected. 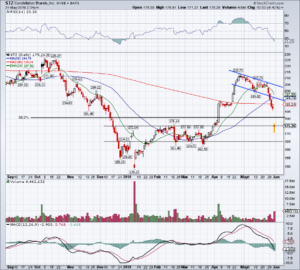 Constellation Brands (NYSE:STZ) is getting hit on Friday too, down almost 6% on the day. A potentially escalating trade war with Mexico is obviously negative news for the owner of Corona, Modelo and various tequilas.

A few days ago, the 200-day moving average gave way, making Friday’s action even harder on the bulls.

If STZ can stay above $175, it opens up the possibility of shares reclaiming the 38.2% retracement at $180.50. If $175 eventually gives way as support — either in the next few days or if the 38.2% is resistance — then a test of $165 is possible. That level has attracted buyers in the past, although an escalating trade war with Mexico likely keeps STZ under pressure.