Here’s a bit of sobering news for Exxon Mobil (NYSE:XOM) bulls. Ten years ago, Exxon Mobil was a $70 stock. Today, XOM stock trades hands around $70. In other words, XOM stock hasn’t gone anywhere over the past decade.  During that stretch, the S&P 500 has risen nearly 200%, Amazon (NASDAQ:AMZN) stock has jumped nearly 2,000%, and Netflix (NASDAQ:NFLX) stock has surged nearly 4,000%.

Consequently, investors should stay away from Exxon Mobil stock for now. The shares will likely be choppy for the foreseeable future, and the chances of a meaningful rally by XOM stock are too small to warrant dealing with the volatility of the shares.

Exxon Mobil Stock Is All About Oil

Exxon Mobil is a very complex, large company with a ton of moving parts. But, when it comes to XOM stock, things are much simpler. Specifically, the price of oil determines the performance of Exxon Mobil stock.

Thus, it makes sense that, as goes the price of oil, so goes Exxon Mobil stock. 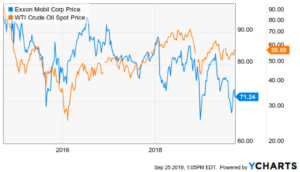 XOM and the price of oil are forever intertwined. Importantly, one leads the other. That is, XOM stock follows oil prices. Thus,to see where XOM stock price will go, it’s best to start with understanding where oil prices are headed.

Oil Prices Will Be Range-Bound

The unfortunate reality is that oil prices aren’t heading significantly higher anytime soon, so neither is Exxon Mobile stock price.

This seems somewhat counterintuitive. After all, there was  just a huge drone strike against Saudi Arabia’s oil facilities which took out about 5% of the world’s oil production capacity in a day. Further, that drone strike was led by Iran, so geopolitical tensions in the oil-rich Middle East region are quickly escalating. If those tensions turn into armed conflict, recent academic research indicates that oil prices could easily soar towards and above $100 per barrel.

But that needs to be taken with a grain of salt. Saudi Arabia is already bringing oil production back online, and the country’s energy minister said that oil production levels would be back to normal – that is, pre-attack levels – by the end of September. Further, U.S. shale oil production has remained robust, and is poised to keep growing rapidly over the next several years. This production boom has led to a sharp rise in U.S. oil inventories.

In other words, Iranian drone strikes and rising geopolitical tensions were supposed to lead to a huge oil market supply shortage and an enduring increase in oil prices. Instead, Saudi oil production is coming back online much sooner than expected, and the U.S. continues to increase its oil production. We don’t have a supply shortage, and we likely won’t have one anytime soon, unless war, which is a wildcard, breaks out in the Middle East.

The Bottom Line on XOM Stock

When it comes to Exxon Mobil stock, the one thing that matters above all else is the price of oil. As go oil prices, so goes XOM stock.

As of this writing, Luke Lango was long AMZN and NFLX.