Traders work on the floor at the New York Stock Exchange.

Investors rotated into the cyclical financial, energy, materials and industrial sectors in September, but they also added to holdings in utilities after interest rates dipped over the summer.

Investors bought financial stocks in September, as interest rates began to rise after falling sharply in August. The group was the top performer, up 4.5%, but they were up just 1.4% for the quarter and 17.6% for the year..

The utilities sector was the second best performer in September, up just about 4%, followed by energy, up 3.6%.

Investors also favored industrials in September, driving the cyclical group up 2.9%, the same gain as materials. Energy shares were up 3.6% in September, but were down 7.3% for the year.

Tech and communications services lagged in September and for the whole third quarter, but tech remains the top performing sector of the year so far.

The information technology sector was up 1.4% in September and up just about 3% for the quarter, but it is still the leader for the year-to-date with a gain of 29.9%.

Communications services, which includes telecom, cable and social media, was up just 0.4% in September, and was the second worst performer, above health care, off 0.3% in the month. 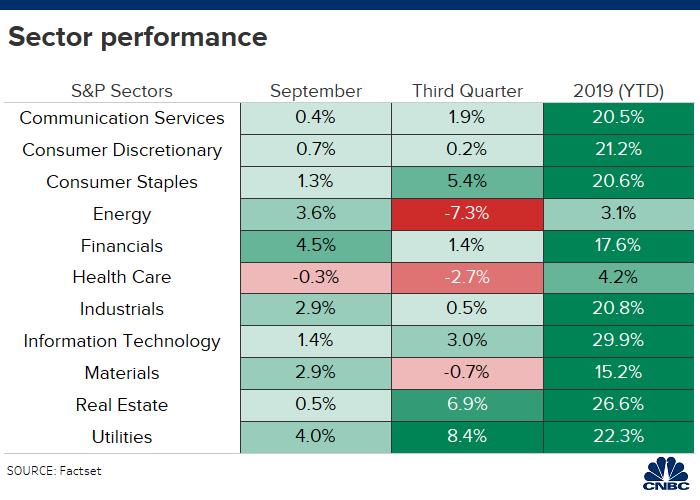